Advaitam Speaks Literary is an international Journal of Poetics and Visual Arts.We are constantly looking for unique and experimental poetry and works of visual art from different corners of the world.We are working on our inaugural issue to be published in July 2017.We will publish our issues four times a year in January, April, July and October.Stay tuned ! 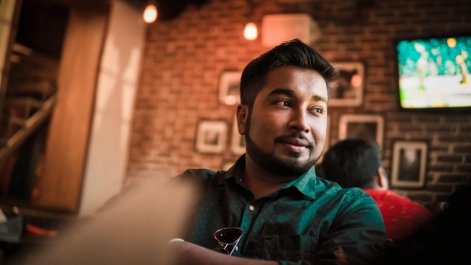 Debasish Parashar is a Multilingual Poet, Creative Entrepreneur, Singer/Musician and Lyricist based in New Delhi, India. He is an Assistant Professor of English literature at the University of Delhi. Parashar is the Founder & Editor-in-Chief of Advaitam Speaks Literary journal. With his debut song ‘Pamaru Mana’ (2018), Debasish became the first Indian singer/composer who dared to fuse 600-years-old Borgeets of Assam with Western Orchestral feel (with layered violins, pianos, snares & vocals) challenging the religious and ritualistic conventions of the Satras. His debut Music Video ‘Shillong’ from his debut EP ‘Project Advaitam’ released in the month of September 2018. He has sung for Raag, In Search of God, MUSOC XXV and elsewhere.

His write-up on Majuli has been listed amongst top 100 online #worldheritagesites stories globally in May 2016 by Agilience Authority Index.

Debasish has received invitations to participate in various national and international literary events/festivals including the 12 th International Writers Meeting organized by UNESCO affiliated Writers and Artists Union of Tarija (Bolivia), 12 International Writers’ Festival-India by India Inter-Continental Cultural Association (India) and The 3 rd Edition of Festival Itinerante in Colombia among others.

Debasish Parashar has received an Honourary Diploma (Diploma de Honor) signed by the Consul of Isla Negra, Chile for the International organization Movimiento Poetas Del Mundo (Movement of Poets of the World). The World Institute for Peace, Africa, offered him to receive the honour of A World Icon of Peace in 2019. He could not receive the honour due to personal differences.

The Indonesian translations of some of his poems by A.S.Rijal were included in the English Poetry Appreciation syllabus of Makassar Islamic University, Indonesia for the year 2017-18. Parashar has been/is getting translated into more than 30 world languages including Russian, Dutch, Spanish, Czech, French, Romanian, Serbian, Albanian, Persian, Afrikaans, Indonesian and Arabic. His poetry has been featured in 10 different books/anthologies from renowned publishing houses in the USA, Russia, the Netherlands, Serbia and Mongolia. Overall, his poetry has appeared in more than 30 countries of the world.

To know more about him :

For his recent release and upcoming songs SUBSCRIBE to:

Advaitam Speaks Literary is an International Journal of Poetry, Poetics and Visual Arts.

We publish four issues in a year in January, April, July and October.